A collection of music for worship. Order here!

Panel 2
Clovercroft Road, a winding trail just east of Franklin, Tennessee, was the site of one of the first reformed churches in the region in the early 1800s. It’s also the home of Parish Presbyterian Church, the congregation where I have the great privilege of writing and directing congregational music. This unassuming wooded road has been the home of a tremendous legacy of simple people singing praises to their God for over two centuries.

Two centuries, one glorious heritage of faith. These psalms and hymns are my attempt to honor those faithful souls who came before us, and to continue this tradition for generations to come. From echoes of the shape-note singing which open the album, to the mournful, country-inspired fiddle and pedal steel that close it, my prayer is that this music will leave a monument for the Christians of Tennessee (and anywhere else), and bring glory to the Savior we worship.

This collection contains eleven settings from the Book of Psalms, with music inspired by life in rural Tennessee. Originally written for Sunday morning worship at Parish Presbyterian Church in Franklin, TN, each Psalm text is set to a melody named for places and people from around our community, middle Tennessee, and the South. But these tunes are also equally at home on the front porch with Granddaddy’s bible and a glass of sweet tea. You’ll enjoy the sounds of tight vocal harmonies, lonesome fiddle, twangy telecaster, and the occasional banjo and pedal steel. Most importantly, you’ll be inspired to meditate on timeless truths from Scripture.

Get the album here! 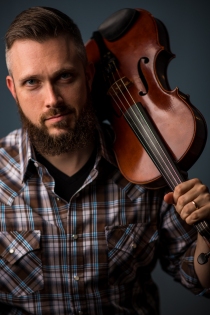 A sixth generation Tennessean, Henry C. Haffner is a Violist, Violinist, Music Director, Composer, and Educator. He has the great privilege of leading worship at Parish Presbyterian Church in Franklin, TN. The primary expression of his musical life is the weekly worship of Christ, through the songs of His people.

As a composer, his pieces for worship reflect a desire for accessibility and a deep sense of history and place. Influenced by figures as varied as Antonin Dvorak and Hank Williams, his debut recording, Southern Psalms, was released in September 2018. His second album, Clovercroft, was released in May 2021.

As a violist and violinist, he has performed and given masterclasses throughout the South and Midwest. His work can be heard on recordings by Nathan Clark George, Jim Daneker, Paul Cardall, and Michael W. Smith. Since 2009, he has performed as a member of the Lexington Philharmonic in Lexington, KY (as Principal since 2011).

Henry was educated at Vanderbilt University and the College Conservatory of Music (CCM) at the University of Cincinnati. He lives with his wife and children in a little house in the country near Columbia, TN.